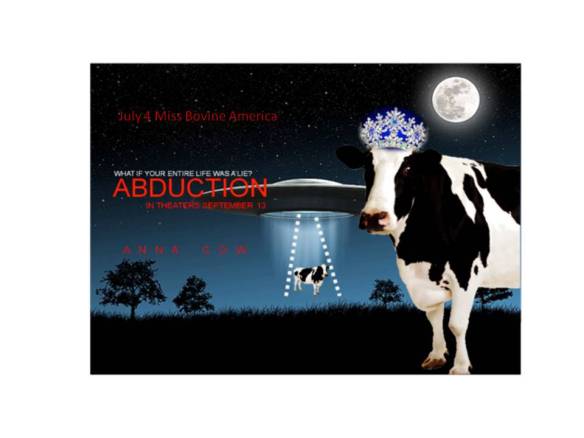 It was a wonderful 4th of July for the Burgerons! Anna Cow was entered into the 4H Club Miss Bovine America contest and won the coveted crown!

Although Anna Cow would be starring in the upcoming feature “ABDUCTION” directed by Steve B. Spiel of B movie fame, she was given a break from her filming schedule and entered in the pageant.

A little background: Anna Cow has been dancing her four legs off training for her new role in “Abduction” because the part demands an uncharacteristic nimbleness especially in the abduction scenes where she will be ‘beamed’ into the alien spaceship in Studio B: Area 106. Anna Cow is also expecting a fair amount of publicity when the public learns that she will not be using a double but will be performing her own stunts in the film- unheard of bovine bravado! She has also spent the past six months on a special diet and exercise regimen to stay trim and fit. Her many years in method acting will allow her to fully realize her new film character.

The Burgerons are very proud of their Anna Cow! Here she is in training!

Here’s Fireworks filmed with a Drone

“Shot by Jos Stiglingh in West Palm Beach Florida, the footage was captured with a GoPro 3 Silver riding atop a DJI Phantom 2 drone.”  Source: http://thenextweb.com/shareables/2014/07/04/celebrate-4th-july-flying-directly-fireworks-display-drone-footage/