Well RockyLou, I can tell you a tale about the lady on the white horse riding in the Suffragette parade, though truly I don’t know much about your Great Great Aunt Elsie as she was disowned for those high falutin’ ideas she picked up when the family sent her back east to be finished. “A crime,” your Great Great Pawpaw said that those easterners ruined her with all those ideas about equality and woman’s rights.

Elsie was Pawpaw’s favourite sister. He said she was never right in her head after that trip and their pa sent her packing right back to Boston. Old Mawmaw, when she was sipping her cordial used to mutter about Lady Godiva and the shame of it all and how was she supposed to hold her head up in the community when everyone knew Elsie had “given away the milk for free.” Never got to meet Elsie in person, though Pawpaw used to say she was a firecracker and a real go-getter!(though never in Mawmaw’s hearing, as MawMaw was a bit of a firecracker too! Her wooden spoon was deadly!) 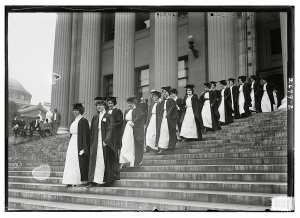 I think some of the pictures show Elsie’s friends in the suffragette movement, one of which I’m pretty sure is Roxy Louridge, the creator of GIFaChrome, whom she met during her time at Barnard College. If I’m not mistaken, the two are in that parade of graduates getting their degree.

Elsie married up I believe, but we lost contact with that side of the family after Pawpaw died.