Two never- before seen poems by Sappho were discovered in a buried urn at the Burgeron Trailer grounds last year when Betsy de R. was investigating some strange occurrences. While classicists rejoiced at the discovery, the Bovine County residents were worried about the attention this would bring to their peaceful community.

As it turns out, Cousin Ron Burgeron is  a world renowned papyrologist at the University of the Netherlands and he has indicated that the poems’ origins are unknown and may have found their way into the black market and ultimately purchased by an anonymous collector in Amsterdam.

Professor Ryker Teunis of the University of Amsterdam, at the invitation of Cousin Ron, will be attending the Bovine County Fairy Tale Festival as a pre-eminent Dutch fairy tale scholar, and so will be able to illuminate the poems’ references to windmills and butterflies.

The text roughly translated, so far, needs some crowd-sourcing to decipher the remainder of the poems’ content:

Once upon a time …
There’s a wind mill

A man and woman

Then …
Don’t know yet

Then …
Wind mill can fly

Then…
Don’t know yet

Then…
Wind mill turns into butterfly

Link to Picture in Museum

Bovine County’s daily newspaper has already announced the summer Fairy Tale Festival, but it has made no mention of the recent Sappho poem discoveries in an attempt to discourage a summer population boom especially from those in the Society for Classical Studies (SCS).

Aunt Sappy would like to invite the entire extended Burgeron family to the Bovine Fairy Tale Festival to get a flavor of  ‘Southern Dutch’. Good times ahead! 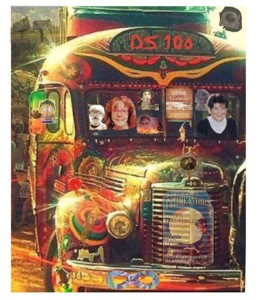 That Magic Memory Mirror is cool- made my first visit this week.  I’d remembered little snapshots and soundbites of song & sound from our lost week, but the mirror revealed a whole lot more that went on.  Our Trailer Song continued to be a hit throughout the week.

The children were all dancing and singing to the Burgeron Children’s Song. And the ABC Song was a hit with the real little ones. It wasn’t clear who commissioned it, but little Sally Lou and the other Burgeron children had a cute cow song for our sweet Anna Cow. Although Don Burgeron was rockin’ the joint with his version of “Who Let The Cow’s Out“.

There were group singalongs, requested solos by Nanalou, myself (Rochelle Louridge), Mama Boo and Cousin Ron.  Dr. M even had a go (after she’d had a bit too much of the ol’ Burgeron Backwoods Brew.)  The Headless Inkspots were in fine form performing a great rendition featuring a banjo, ukelele and Strawberry Arizona washboard.

But that duet with Nanalou and Cousin Froid was… shall we say… an event that I am amazed any of us could forget.

There wasn’t a dry eye in the house when my daughter, Amber, and I sang “Motherless Child”

Cousin Ron was heard playing the old piano out in the cow barn behind the trailer.

Who knew Little Ron Burgeron’s music lessons would pay off in the long run. Piano AND Guitar. The man has talent. But his moonshine induced croning over “Betty-Lou Schaeffner” was a sorry sight.

Aunt Sappy was reciting love poetry in all manner of languages. Her German poem “An Anna Blume” was described as a parody of a love poem, an emblem of the chaos and madness of the week.

But who’s this Metadude guy?  Some of the Burgeron family members were really digging his techno vibe. But the mirror only let me hear the music and allowed me to catch a few glimpses of the story. I’m really curious now.  If anyone has any more detail please share with the rest of us.

It’s been a while since we found Nana Lou surfing with Sappho on Maui.The leaves are falling now from the few trees around the Burgeron Trailer, and the Burgerons are nowhere to be found, leaving the trailer abandoned to the elements. Spiders make homes now where pets were housed and the full harvest moon languishes in the sky casting ghostly shadows on the once lively trailer in Bovine County. Nana Lou’s spirit still haunts the trailer grounds, and her ghost appears from the balcony of Dr. M’s tree-house on moonlit nights. Strange howls and cat screams punctuate the still nights while the ‘East of the Web’ Witch has been seen riding her broom above the trailer.

I Was Standing on the Corner of Winslow Arizona…
For the Eagles, the story was meeting a girl in a flat bed Ford– what else might have happened on this corner?
Sappho’s story coming soon……

Betsy de R. and Sappho (Aunt Sappy) have revealed some secrets and have co-produced a short film for the Burgeron family. They are using this short film as a trailer for a full feature length film they plan on producing in the near future.

They are not telling their story quite yet, but they wanted to show the Burgeron family some of their findings in that old tin can they found while digging late at night 2 weeks ago.

On their way to the internet cafe to post their news, they passed a sign in Bovine which brought back many memories. What with all of Don’s cows running around lately, they thought it was time to remember some of the chickens at the trailer!

Betsy de R. is sure that the Bovine Herald will pick up on the Bitcoin discovery unearthed 2 weeks ago under the trailer deck.

To listen again to the investigative digging, click here! (that’s for you, Don!)

All writing by Sappho (@Janweb3)

Sappho has been taking some time out from her Burgeron preparations to enjoy the warm summer and all the street festivals in neighboring Bovine County towns. Although she has never known why Ma and Pa Burgeron gave her a Greek name, she has always been fascinated by antiquity and especially some of the folkdancing still preserved in the many multicultural communities across North America. The links to the ‘old country’ are palpable in dance and food.

Here is a video of Greek Day which Sappho filmed while traveling last year.

Sappho and Betsy de R. have also been digging around the Burgeron trailer off and on looking to unearth some of the Burgeron secrets and mysteries through artifact collection. Last week, they found an old tin can under one of the trees near the trailer deck. Betsy de R., ace reporter, was able to capture an image even with very little light. When Sappho saw the old tin can, she was reminded of a story Pa Burgeron always used to tell her when she was young about when he was stationed in Gozo.

I’m concerned enough that I’m calling for help. Dr. M posted her concerns earlier today. There are now several Burgeron family members that are missing: JJ Mac GIF, Stefanie, Bella & Bonnie Burgeron , and Julie Burgeron.  Quite possibly West Burgeron too – although I’m not positive if he was coming or not. There was even a mention quite early on that the Headless Inkspots from over in DS106 City would be sharing their music at the trailer this summer.  Everyone made contact early on that they would be joining us, started their journey, then not a word. Our Bovine County ace reporter Betsy de R. and Aunty Sappy were investigating some strange sounds over the 4th of July, possibly linked to that mysterious AREA 106, but they haven’t located any of our missing family members. Thank goodness we know Anna Cow is just fine. Congratulations dear on be crowned “Miss Bovine America” at the Bovine County fair.  While Mama and Little Boo are doing some traveling over in Italy at the moment, they’ve at least kept in touch to let me know they’ll be back home in plenty of time to help with the preparations for the big family reunion.

Now with all these missing family members, I personally took it upon myself to head over to the Bovine County seat in DS106 City last night to flash the Bovine Signal, hoping to summon our local caped crusaders to aid us in finding our lost family members.  Could they have been abducted? Or have they been sucked into a time vortex like Highlander Don? Or met some other sinister demise? Maybe they’re just lost and their cell phone service doesn’t reach out here. Whatever it is, I want to get to the bottom of this.  I’m turning 100 for landsakes. This is a big event for the family.  No evil do-er is going to ruin my party.

Visits to the Burgeron Family Site

The Burgeron Family Website by The DS106 Open Community is licensed under a Creative Commons Attribution-NonCommercial 4.0 International License.