The official opening of the Fairy Tales Around The World workshops is next week. And this Burgeron family matriarch is looking forward to following in the footsteps of the Italian Fairy Godfather by collecting the tales and art created at this year’s Bovine County Fairy Tale Festival. By the end of the summer we plan on having enough material to publish an official multi-media flipbook to share with the rest of the world. But until then you can read one of the earliest (1550) and most valuable collections of fairy tales in history and find out for yourself why in 1624 it was placed on the Index of Prohibited Books.

The first book of Fairy Tales were said to have been collected by Giovanni Straparola in 1550.

Set aside Charles Perrault and The Brothers Grimm, are you familiar with the name Straparola? Giovanni Francesco Straparola?  No? Well, this man collected and created one of the earliest and most valuable collections of fairy tales in history, setting the standard for many of today’s much loved fairy tales, and earning him the accolade of Fairy Godfather. What makes Straparola’s collection, The Facetious Nights of Straparola, one of the most important to exist is that it is perhaps the first use of popular folklore as a basis for fictional literature.

The Facetious Nights of Straparola was first published in Italy between 1550-55  where Straparola uses a frame narrative of participants at a 13-day party on an island near Venice telling stories to one another that vary from bawdy to fantastic. Songs and dances begin each night, and the nights end with a riddle or enigma. The 75 tales include folk and fairy-tales (about 15); Boccaccio-like novellas with themes of trickery and intrigue; and tragic and heroic stories.  Many of the tales were later collected or retold in Giambattista Basile’s The Tale of Tales (1634–36) and Jacob and Wilhelm Grimm Grimm’s Fairy Tales (1812–15).[1]

In 1894 the tales were translated into English for the first time by W.G. Waters. Click on the books below to read and find out for yourself why the Fairy Godfather, Giovanni Straparola (aka the “Babbler” ), was  placed on the book blacklist.

The Nights of Straparola – Volume 1 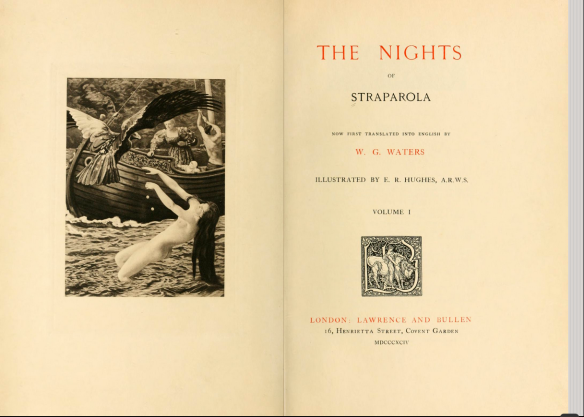 The Nights Of Straparola Vol 1 by W.G. Waters

The Nights of Straparola – Volume 2 The Nights Of Straparola Vol 2 by W.G. Waters